TUTORIAL - MAKING A PILLOW FROM NECKTIES 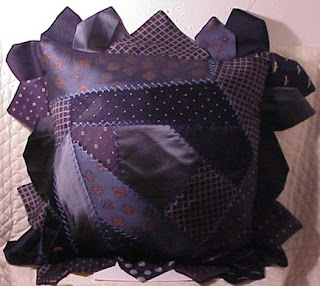 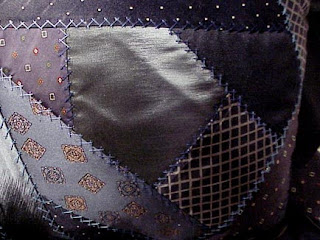 Upon posting a picture of the pillow made of neckties several asked me to write a tutorial about it. So I am posting it now on my blog. If you have any questions, please feel free to ask, I'll be glad to help. It is a very easy pillow to make and yet quite different in that you can make it very masculine!! No fru fru for a man's pillow!!

TUTORIAL - MAKING A PILLOW FROM NECKTIES. By Carol Lindberg

Be sure your neckties are all clean and free from stains, or watch when you use them to cut around any stains that are permanent. Pull the long thread at the back and open the neckties up. Remove the filling, and then press them open flat. (I want to say that I did not remove the lining of the large point and the small point on the other end, as I used those for 'fringe' around the pillow to finish it.)

I cut a piece of muslin about 2" larger than my pillow form. (mine was 16" square). I began with a 5 sided piece of one of the neckties. I used the flip and sew method of piecing. My ties were all shades or figures with blue in them, as it was for my son. I tried to keep it masculine for him!

After piecing and covering the muslin, I used the chevron? stitch on all the seams in a blue thread. Again, I did this to keep it masculine. But it could be made with several colors of ties and colors of CQ stitches also.

The back was a plain piece of blue silk cut the same size as the muslin. Before putting the back on, I placed the ends of the neckties all around the edge of the front of the pillow to be stitched on with the machine. I lapped them over each one just a little, and since I happened to have 4 of the large ends I used one in the middle of each side and the smaller pieces lapped over to finish out each side to the corners. I think I did have to make about 3 of the smaller ones out of the necktie material, as I wanted the fringe to be the same as the fabric pieced on the front. Again, this is optional. I stitched these all four sides on the machine. Then I could put my back on and didn't have to worry about anything moving and the stitching was right there visable where I had stitched the fringe on, so I could stitch the back on and it covered the other stitching. I left one side open about 9 inches in the middle of the side.

Then you can turn it all right side out. I had to roll up the pillow form very tight to insert it in the small 9" opening, but was able to spread it out nicely once it was in there. I used more dacron that I stuffed in the corners and all around the edge of the pillow form to be sure it was all filled and even.

Then just blind stitch up the opening, and your pillow is finished.!! Really easy to do and quickly made. I'm sure I could make another one in less time too. You know the first one is always more time consuming as you are actually making yourself a pattern while you work.

Hope you enjoy making some. It was a hit with my son and the others too. He figured out right away that it was made of neckties from the points around the edge. Also, his favorite color is blue, so that was appealing to him also. Made this Mother feel very good!!!! I have made other things for the girls, and thought I should make something for him with his Mother's stitches on it.

The rest of the men in the family may well get a pillow next year made of neck ties! But I wanted my son to have the whole show this year with his. LOL

Here are pictures of the finished pillow.

Merry Christmas Carol! How sweet you are to give us all this tutorial as a Christmas gift! Your cushion is lovely - beautiful stitching!
Hugs,
Kerry

This is lovely, and beautifully done! Thank you!

Happy New Year Carol!
Love the tie pillow, and what a great idea!

Carol, Your pillow is so pretty! Such a clever use of the men's ties :o) Thanks for sharing the tut for it.

because it never hurt's to ask... would you consider making one for me for a fee? I've saved some of my father's neckties and would love to have one for myself, and maybe as a Christmas gift for my brother... but I'm not handy with a sewing machine, unfortunately :(
Yours are incredibly beautiful!
Thanks for considering,
Jennifer

I will try out.
The pillow is looking awesome.

Hi,i saw thats so nice pillow and i am try this tips my home decoration your thanks

Your pillow is so pretty! Such a clever use of the men's ties :o) Thanks for sharing the tut for it. Cheap Boston Red Sox Tickets

Your pillow is so pretty! Such a clever use of the men's ties :o) Thanks for sharing the tut for it. Cheap Boston Red Sox Tickets

Hi,i saw thats so nice pillow and i am try this tips my home decoration your thanks Cheap The Eagles Tickets

How sweet you are to give us all this tutorial as a Christmas gift! Your cushion is lovely - beautiful stitching!

but I'm not handy with a sewing machine, unfortunately :(
Yours are incredibly beautiful!
Thanks for considering,

Great Tutorial on how to make pillows. The designs are also unique with differnet shades of color.
Website Developers India

Thanks for your marvelous posting! I quite enjoyed reading it, you are a great author.I will be sure to bookmark your blog and definitely will come back from now on. I want to encourage that you continue your great job, have a nice day!

I am so glad read your wonderful article. Im looking forward to read more of your works and posts. You did a good job! Try to visit my site too and enjoy. 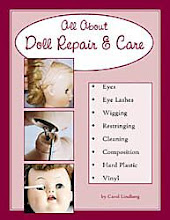 This is where I live in Wichita, KS

But I would rather live here!!

I am Carol Lindberg. I love all types of needlework especially crazyquilt styles. I have made many things and love them all. My favorite style in my home is Victorian and the things I have made for it reflect that style. I do a lot of sewing for dolls to sell on eBay, which takes up most of my time, but enjoy 'stitching' just a little bit each day if possible!. I don't think to post often, however I do enjoy reading the CQI and CQE posts daily and seeing all the eye candy on each of them. Thank you for viewing my blog.

CAROL'S COTTAGE PLACE
I am retired. In the past we had a large Antique and Doll shop, buying and selling all kinds of dolls and antiques. I restored dolls for 25 years. I no longer do any kind of doll restoration. I developed a Doll Cleaner, CAROL'S MIRACLE DOLL CLEANER, and am author of the book, ALL ABOUT DOLL REPAIR & CARE by Carol Lindberg. My husband and I supplemented our retirement income selling on eBay for several years. I still sew and make a lot of doll clothing and accessories.

HOW TO PIECE A CRAZY QUILT BLOCK

Picture of me & my first CQ project

GOOGLE SEARCH FOR YOU TO USE